(Here is some interesting information about the mausoleum.) 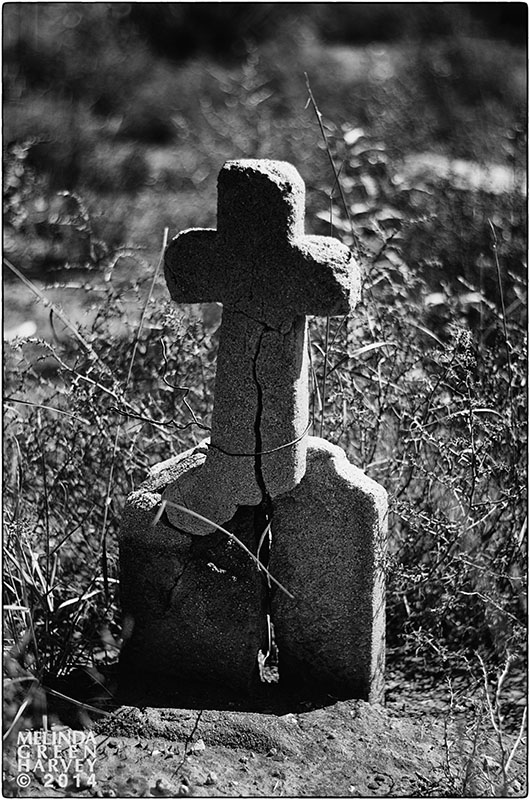 This grave marker doesn’t have any names or dates on it. It’s small, only about a foot high. Unlike markers in fancier cemeteries, it’s made from concrete. Time has been hard on it, and now there’s a crack that runs from the base nearly all the way to the arms. A loop of wire, twisted a few times, does what it can to hold the little monument together. For now, anyway.

Sometimes when I go to cemeteries, things other than headstones catch my attention. Wildflowers, maybe, or things left at gravesites. I never know what it’ll be, and like to just wander until something catches my attention. On this particular day, in this particular cemetery, the most interesting things to look at were the relics of iron markers around the graves.

This cemetery is old (for Texas, I mean), dating from the early 1820s, and many of the graves were ringed by ornate metal fences. With few exceptions all the parts of the grave-fences were there, but almost none of them still held to their original alignment. And over the years, the metal had taken on a reddish, rough appearance; light-green lichen grew on a few of them. On the first day of March, the bright spring grasses made for a nice contrast, both in color and age.

It was cold that day. And windy. The wind was so strong that it was hard to stand still enough to take a picture. I took this shot in record time, and hurried back to the warm car.

It’s too bad I was unprepared for “spring” in Michigan – which is different than “spring” in Texas – because this looks like it would have been an interesting cemetery to explore.

(Also it was so cold that I forgot to follow my usual procedure of shooting some identifying signs of the place. Through a lengthy process of looking at the other shots I took that day and referencing Google maps and street view, I determined that this was in Sharon Township. The maps didn’t give a name for the cemetery, and street view didn’t have a clear enough view of the sign that I could figure it out. But I can tell you that it’s next to the Methodist church. In case you were wondering.)

The weather forecast said it would be in the low 70s, so it was only because I was lazy that I even had a coat with me – it had been left in my car from the previous bit of cold weather. I had some activities for work about an hour’s drive from Lubbock, and I took my camera (of course!), planning to take advantage of the promised nice weather. The work activities – a couple of ribbon-cuttings – were held outdoors and the weather got steadily colder as the day progressed. By the time I left, the temperature was in the high 40s.

When I stopped to take this picture, the thermometer on my car said it was 45 degrees. When I got to the next town, only nine miles away, it was 54 degrees. And when I got back to Lubbock, 30 miles from where I took the picture, it was, as promised, in the low 70s.

Everything changes. Even the weather.

Lately – as perhaps you’ve noticed – I’ve been in a musical mood. Here’s a Bruce Cockburn song:

Make me a bed of fond memories
Make me to lie down with a smile
Everything that rises afterward falls
But all that dies has first to live.

— Bruce Cockburn – Joy will Find a Way (A Song About Dying)