In addition to selling fish from their boats, the fishermen use their afternoon at the docks to repair their nets. They’ll be heading out again in a few hours, and make good use of every minute.

I can get a giant tangle in thread just attempting to sew on a button. Watching these two doing something more complicated and much more fiscally important than fixing a button made me feel really quite inadequate in sweing-needle-based activities.

This looks like a scene from a World War II movie, with the rubble, the courtyard, the motorcycle hiding in the shadows. And while there was significant and pivotal action on the island during the way, I am pretty sure this scene wasn’t a relic.

So, how pivotal was the action in Sicily? Here’s what History.com has to say:

The invasion of Sicily, code-named Operation Husky, began before dawn on July 10, 1943, with combined air and sea landings involving 150,000 troops, 3,000 ships and 4,000 aircraft, all directed at the southern shores of the island. This massive assault was nearly cancelled the previous day when a summer storm arose and caused serious difficulties for paratroopers dropping behind enemy lines that night. However, the storm also worked to the Allies’ advantage when Axis defenders along the Sicilian coast judged that no commander would attempt amphibious landings in such wind and rain. By the afternoon of July 10, supported by shattering naval and aerial bombardments of enemy positions, 150,000 Allied troops reached the Sicilian shores, bringing along 600 tanks.

fisherman, with shrimp and a cigarette

In the afternoon, when the fishermen return with the day’s catch, the port is very busy. There are commercial buyers who come to get fish for tomorrow’s markets. There are local residents who want some fresh shrimp for dinner. And, on this particular day, there were photographers who were probably in the way of people who had actual reasons to be there. (Not that photography is not an actual reason, but you get the point.)

Also, this guy? Do you like his cigarette hovering over that tray of shrimp?

Our neighborhood in Palermo was perfect for our photographic explorations; it was easy to fill our time with wandering through the streets. There was always something interesting to see, and, naturally, to photograph. The streets were vibrant, full of activity.

This is at the intersection known as Quattro Canti, the center of the historic quarters of the city. It was always busy, and nighttime made for some interesting photos.

Have I mentioned how much I loved Sicily? 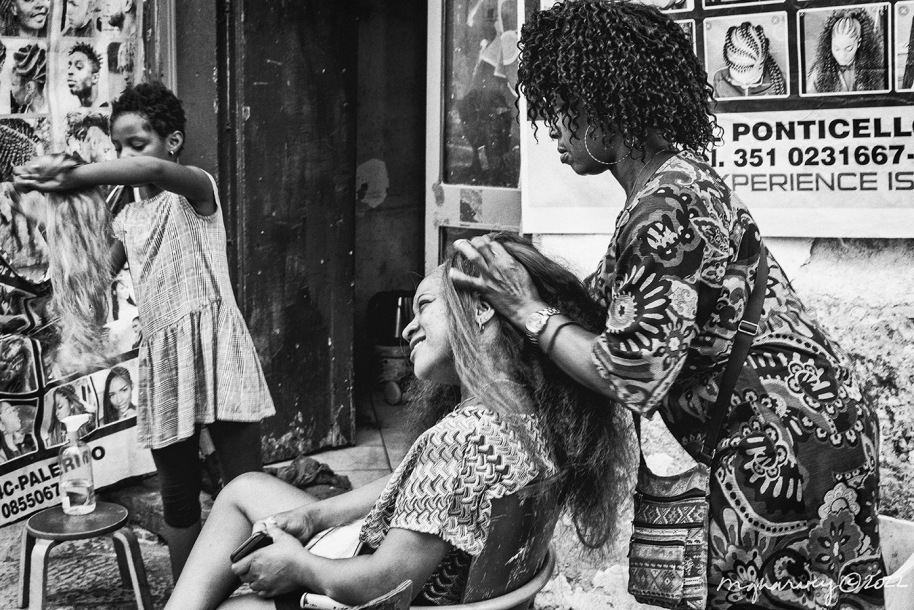 Based on how many times lately I’ve mentioned the joys of exploring Sicilian streets, it’s probably safe to assume that part of the trip made a big impression on me.

In the US, there’s an urban planning thing right now called “complete streets” which is defined by Smart Growth America this way:

Complete Streets are streets for everyone. Complete Streets is an approach to planning, designing, building, operating, and maintaining streets that enables safe access for all people who need to use them, including pedestrians, bicyclists, motorists and transit riders of all ages and abilities.

I can’t argue with the premise, but the results are way less organic that what I recently saw. For example, the opportunity of getting street-side braids is NEVER listed as a thing that ought to happen. Yet, here in Palermo, a braider and an apprentice braider are busy – and they’re working right there on the street.