Hello, and welcome to Random Music Friday, where we here at One Day | One Image introduce you to, well, random music. Today’s song is “Julia”, by the Flatlanders, one of many exceptional bands with deep musical roots in Lubbock.

Anyway, give the song a listen; it’ll make the title of this post make sense. Maybe.

Out here in the hot Southwest, it’s not uncommon to see vinyl window blinds on west-facing windows that have gotten a little bit melty in the heat.

That fabulous stone wall, though, is a little more unusual. 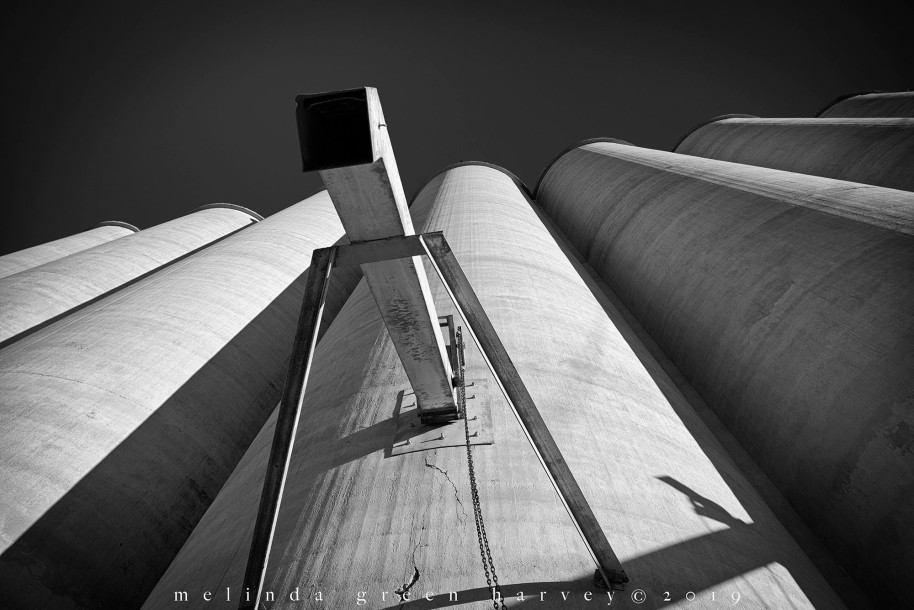 Well, who wouldn’t notice what the sun was up to on these concrete grain elevators and pull off the main street to get a photo?

I would absolutely do it! This is a shot from 2013 of the other side of these very same elevators.

I’m in a rut, but at least it’s six years wide.

You know how I always like to go around back when I am shooting, just to see what I can find? I also try to remember to look up. Which is how I found this interesting array of lightbulbs hiding (in plain sight!) under the marquee of the Mesa Theatre in Clovis, New Mexico.

I wasn’t able to find anything much out about the Mesa, other than it had a fire in 1948 and was rebuilt. Perhaps my Research Department can take over from here?

Zia. It’s everywhere in New Mexico. On the flag. On license plates. Twice on this building in Clovis. Even, according to this article, on public toilets.

But it’s also a sacred symbol of the Zia Pueblo, a tribe of about 850 members, who feel that perhaps their tribal symbol is being used in ways that are not in accordance with their beliefs. The current session of the state legislature has asked the State Department of Cultural Affairs to prepare a report on the matter. A previous fiscal impact study on the issue said the Cultural Affairs Department should consult with Zia Pueblo, but cautions that “there is potential for conflicts of interest between the state and the pueblo, particularly if the report is intended to include recommendations.”